NV Integration is pleased to announce we have won the highest achievement at the 2018 Lutron awards - "Best HomeWorks QS Project".

HomeWorks QS is Lutron's flagship product and is ideally suited to high-end residential houses or apartments. Our Siam Smart House project was submitted for the awards and we feel was a worthy winner, with the judges commenting "we are stunned by the size, scope and complexity of this project".

This is incredibly the fourth award that this project has claimed, having also picked up "Best Integrated Home over £360,000" and "Technology Meets Design" at the CEDIA 2017 Awards, and "Best Home Cinema" at the Smart Building Awards 2017.

You can learn more detail about this project and the lengths it took to claim the coveted top prize at the Lutron awards below:

Owing to the size of the property, the Lutron HomeWorks QS system was split between seven LCPs, over three locations throughout the property. Complementing this are over 25 audio zones and 16 video zones with a Crestron system deployed to allow the matrix switching between sources and outputs. NV Integration is proud of this project given the logistical issues of delivering a project of this size with the geographical, logistical, and language challenges we overcame.

The client was familiar with smart houses as this is their third (NVI also look after their UK property) and was a key part of the brief. Wherever possible we were asked to consider creative ideas that could provide that wow factor and to make this house as ‘one of a kind’ as possible because entertaining is the primary function of this home.

Challenge accepted. We designed solutions that allowed the technology to be hidden when not in use, yet reveal at the touch of a button all from simple and intuitive controls.

The project was originally specified by the consultant with alternative home automation, lighting control, and window treatment systems. After discussing the brief with the client, we wrote a report to the project team explaining the disparity between the specified manufacturers and the inability of those to meet the clients brief.

At that time the project was re-specified as Lutron HomeWorks QS for the lighting and window treatment controls, and Crestron for the home automation. NV Integration were also informed it was no longer a competitive tender, but a negotiation for us to undertake the project.

Not content with the hidden technology mentioned above, we were tasked to provide bespoke user interaction for control of the system:

A house of this stature and contemporary style was perfectly suited to Lutron Palladiom keypads. The client loved the look, feel, and responsiveness of them. In every room, the lighting and window treatment controls were integrated into the engraved buttons. Once again going above and beyond with this project we also integrated the air conditioning ‘on/off’ controls into the Palladiom keypads in each zone; this includes AC feedback status thanks to the illuminated text. This two-way feedback is always responsive, even if the AC is controlled from another source (Crestron, or manufacturers proprietary controls).

By using the intelligence within the LQSE-2DAL-D module we created an incredible sequencing effect in the main stair hall. The concept was to simulate a shoal of fish swimming upstream and was executed by illuminating the appropriate downlight in timed order above the glassfish so that the reflected light created the illusion of the fish circling above the stairs. This stairhall is also notable in that it has four Roller100 side guide wired controlled Sivoia QS blinds which drop over 6 metres from the ceiling to the finished floor level of the ground floor below. 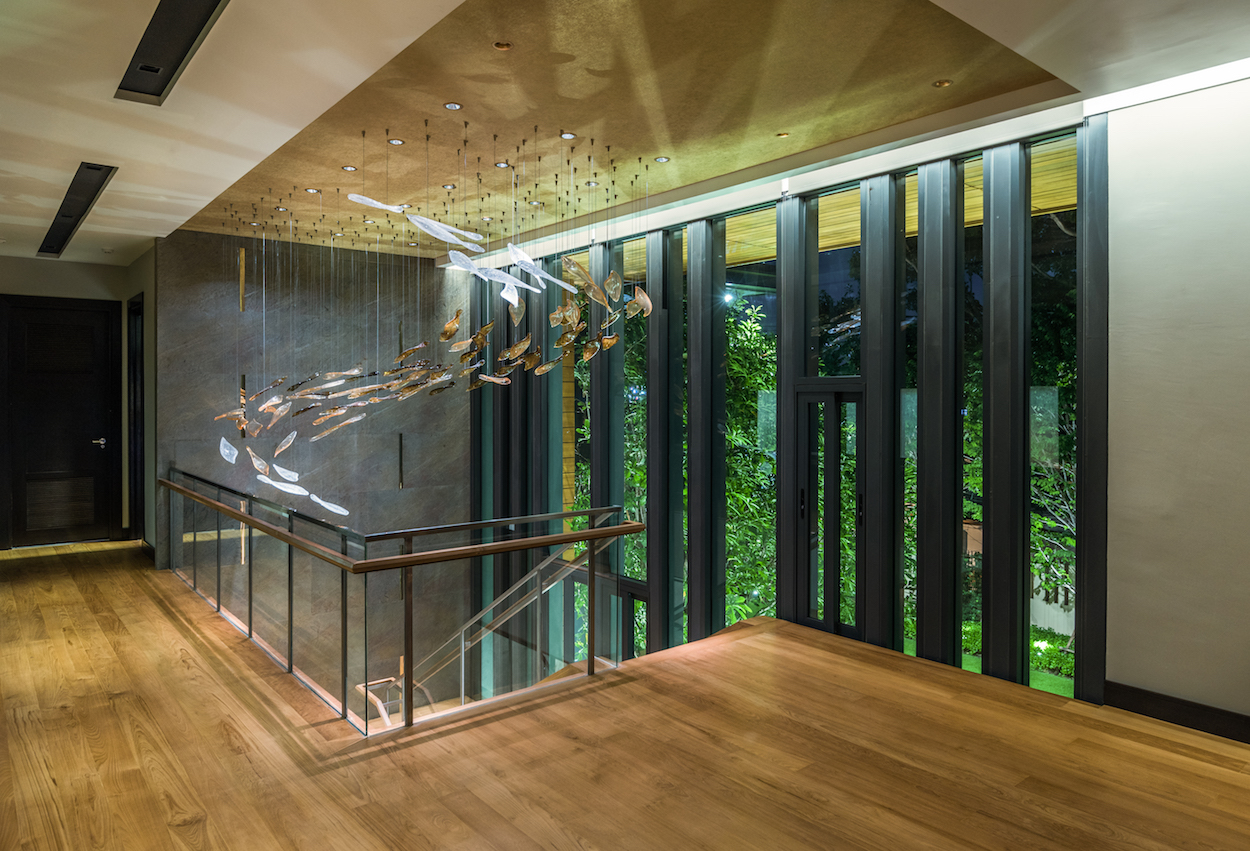 Delving under the hood we used Lutron for the ‘heavy duty’ lifting of the project also. The client spent tens of thousands on fully developed adult Koi Carp to populate the stream which hugs the circumference of the building. These ponds needed strictly timed oxygenation to keep the fish alive, and the air was forced into the water via fountains controlled from Lutron’s DIN rail switching modules 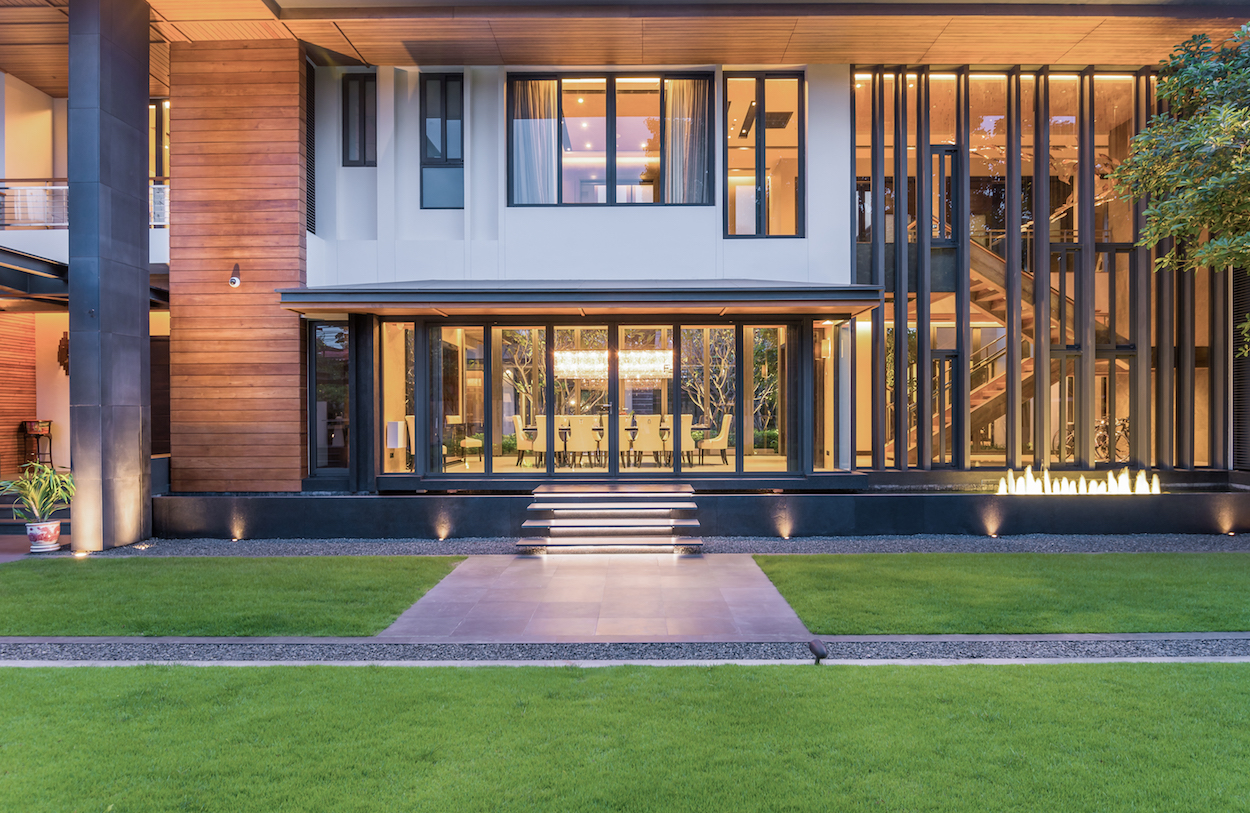 In such a hot climate Lutron was also called upon for integrating the sprinkler system. This can be actioned or suspended (in case the client is using the garden) from the Palladiom keypads, but typically runs on a pre-determined timer depending on the season. Through the Crestron integration, we were also able to listen to an RSS feed, and during the monsoon season, the sprinklers do not run if it has rained that day to save water, energy, and prevent over-watering.

This included integration with the wine cellars, allowing the Crestron system to keep track of, and show information regarding the wine stored via label camera recognition. Plan layouts of each floor provide feedback as to room status – showing if the lights or air conditioning have been left on, and the ability to switch off at the touch of a button. Plus the much used ‘party mode’ feature. These custom designs set the user interaction of this project apart from the usual ‘cookie cutter’ approach.

We are tremendously proud of the accomplishment achieved with this project, in light of the challenges faced we turned a large and complicated smart home, into an easy to use and seamless experience for the client.

Since completion, we have been appointed for our third project with the client. This is a mixed-use new build property in Asia, with commercial office space over 5 floors, and a private penthouse apartment for the client on the top floor. The entire building will be controlled via a Lutron HomeWorks system, with Sivoia QS window treatments, and Palladiom controls: